China Doll were formed in 2000 by original guitarist Matt Rowley, drummer Simon Henshaw. Later that year Rob Wylde answered an ad, became the band's vocalist, also taking on bass, songwriting duties. The band were completed by Slovenian keyboardist Sasha Bergant. In 2001 Rowley left the band to start a career as a sound engineer, was replaced by Rich Housechild. The band toured throughout the UK before recording, releasing their debut EP Better Late Than Never in late 2002. The following year the band caught the attention of Nottingham based record label TB Records who put them on a UK tour in the summer of 2003 opening for Danger Danger, and signed a 2 album deal. Unfortunately, neither Housechild nor Henshaw could fully commit to the band, TB lost interest, and the band soon split. Straight afterwards Rob Wylde would go on to form, and find success in powerpop band Teenage Casket Company. 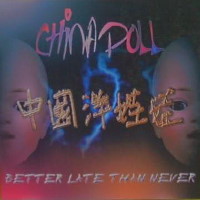 The music discographies on this site are works in progress. If you notice that a particular China Doll CD release or compilation is missing from the list above, please submit that CD using the CD submission page. The ultimate goal is to make the discographies here at Heavy Harmonies as complete as possible. Even if it is an obscure greatest-hits or live compilation CD, we want to add it to the site. Please only submit official CD releases; no bootlegs or cassette-only or LP-only releases.

EPs and CD-singles from China Doll are also welcome to be added, as long as they are at least 4 songs in length.