(Banner ads are FREE for bands and labels. Email me if interested.)

This Welsh bunch, used to go by the name of Preacher and were formed in 1981. A few years later they released their sole album Across the Water, through High Dragon, an offshoot of the famous French Black Dragon label. The band's style was slightly prog inclined but highly melodic hard n heavy. Some material was also done for a follow up, and a single was released a couple of years later on the bands private label, but since there wasn't any huge interest, the band did go their separate ways. Neville MacDonald would later surface as the frontman of Skin to moderate success in the 90s who have since split up as well. 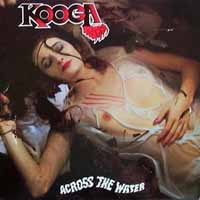 The music discographies on this site are works in progress. If you notice that a particular Kooga CD release or compilation is missing from the list above, please submit that CD using the CD submission page. The ultimate goal is to make the discographies here at Heavy Harmonies as complete as possible. Even if it is an obscure greatest-hits or live compilation CD, we want to add it to the site. Please only submit official CD releases; no bootlegs or cassette-only or LP-only releases.

EPs and CD-singles from Kooga are also welcome to be added, as long as they are at least 4 songs in length.