1 week left and donations have flattened out at 55% of goal, covering just over 6 months of site expenses. This annual drive keeps the site free for everyone to use, so if you find the information useful, please help support the site. The drive will run through October 31, details over on the Heavy Harmonies Forum.

Thank you for supporting Heavy Harmonies!

Like Martin Darvill, Alan Friedman is an accountant who has gathered together a host of musical friends and clients to guest on his debut solo CD The Test Of Time. And quite a collection of guests it is too, including Bobby Kimball (Toto), Jonathan Mover (Joe Satriani, Alice Cooper), most of Living Colour, Jeff Peevar (David Crosby, Joe Cocker, Jackson Browne) and David Stoltz (The Dickey Betts Band). With so many top musicians involved in the recording there is no concern that the performances are anything other than straight out of the top drawer. But what of the music? Can an accountant really write rock songs? The answer is an emphatic yes! The breadth of material is impressive as well. Album opener Side By Side, the first of two tracks featuring Bobby Kimball, not surprisingly sounds similar to Toto and features some rather fluid guitar work from Mr Friedman. Nearly Down The Road, the other track featuring Bobby Kimbell, couldn't be more different, a more up-tempo rocker featuring a solid performance from all involved but particularly the guitar and keyboards. Who Do We Think We Are? is a clever composition, the lyric of which consists solely of titles of songs by Deep Purple. The music is a fine pastiche of that band as well, with some great Hammond work by Mark 'Zed' Zampino. Real Bad News is a more bluesy number with some nice jazzy sax and keyboard interplay, although the talkbox guitar effects does tend to date the piece as somewhat of a seventies throwback. Title track The Test Of Time has a kind of Eagles / Venice vibe to it with some nice slide guitar (courtesy of Jeff Peevar) and is one of four tracks to feature the fine vocals of Robbie LaBlanc, one of the few non-professional musicians on the album (he is actually a wine salesman, keeps the vocal chords lubricated I suppose!) There are a few slower paced tracks including Someone To Blame (sung by the lovely Sally Eckels) and Love Won't Let You Down that vary the tempo while Grinding, featuring Cory Glover and Doug Wimbish fairly grooves along. The album ends with a short comedy sketch which culminates in the guitar heavy Lukelear Meltdown, a tribute to Steve Lukather. Overall a good and varied album. Maybe not something for the hard core progressive rock fan but certainly of enough interest for people with more varied tastes. With friends of the calibre that Alan Friedman can assemble, to play on an album that has been produced simply for the love of music, plus an educational/good time band comprising accountants and associated professionals (called, with tongue firmly in cheek, The Accounting Crows), who said accountancy was boring?! 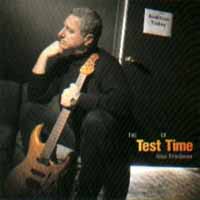 The music discographies on this site are works in progress. If you notice that a particular Alan Friedman CD release or compilation is missing from the list above, please submit that CD using the CD submission page. The ultimate goal is to make the discographies here at Heavy Harmonies as complete as possible. Even if it is an obscure greatest-hits or live compilation CD, we want to add it to the site. Please only submit official CD releases; no bootlegs or cassette-only or LP-only releases.

EPs and CD-singles from Alan Friedman are also welcome to be added, as long as they are at least 4 songs in length.