KHIGH is rapidly becoming the new reality in hard rock music and will quickly capture your interest with its fresh and innovative approach to song writing and musicianship. The band, with its technical skill and compelling creativity is roaring past all the stagnant, generic hard rock acts that are out there. With its debut album, 'Wise Hedonist', KHIGH breaks away from the safe and conventional writing methods and dares to explore the entire rock spectrum, blasting into new and challenging musical territories. Formed in Los Angeles, California in 2002, KHIGH first came to life when Kris had a passionate desire to create a new heavy rock project. Having spent many years as the guitarist of several hard rock acts in the USA and Europe, Kris decided to cultivate his own project and by the end of 2002 had gathered a roster of skilled musicians to give life to his brand new 3-piece band. Zed (bass) and Winnie (drums) were the necessary ingredients to complete the band's lineup. From its inception, Kris was the project leader of KHIGH, handling all the songwriting chores as well as filling the demanding role as guitarist and lead vocalist for the band. Raised in a multicultural environment, Kris began familiarizing himself with musical instruments at an early age. Through hours and hours of practice each day and studying a huge amount of music theory, he began to hone the exceptional skills that would become necessary and essential for such a challenging and demanding project as KHIGH. Kris has been influenced by a wide variety of musical genres, from classical to heavy metal (and everything in between), with tastes ranging from Judas Priest to Megadeth, Cacophony to Tool. From the shredding of Paganini, to the awesome oriental atmospheres of Marty Friedman, the fundamentals of Hendrix, and the steady hard rock riffing of the 80'sthese elements are all key to understanding the evolution of Kris and have helped elevate him to become one of the best guitarists and musicians out there and has enabled KHIGH to achieve new heights. 'Wise Hedonist' is a unique and creative hard rock release jam packed with infectiously catchy guitar melodies, breathtaking solos and splendid vocals. From the thunderous intro of Too Late and the relaxing flow of Latin Truths to the catchy bonus song Three, this is a well-rounded debut that is sure to be noticed and enjoyed. KHIGH has taken its high-powered live act on the road to the west coast of the USA and southern Europe, where enthusiastic crowds are being wowed by Kris' intricate guitar playing, stellar vocals and the tremendous performances of the band. KHIGH has developed into a heavy rock machine that continues to thrill the American and European rock and metal crowds. They hope to see you on the road soon! 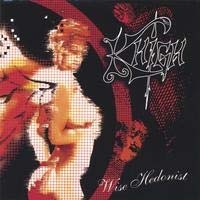 The music discographies on this site are works in progress. If you notice that a particular Khigh CD release or compilation is missing from the list above, please submit that CD using the CD submission page. The ultimate goal is to make the discographies here at Heavy Harmonies as complete as possible. Even if it is an obscure greatest-hits or live compilation CD, we want to add it to the site. Please only submit official CD releases; no bootlegs or cassette-only or LP-only releases.

EPs and CD-singles from Khigh are also welcome to be added, as long as they are at least 4 songs in length.